skip to main | skip to sidebar

Scouts worldwide mark Founders Day
Written By:VPPS , Posted: Sun, Feb 22, 2009
Caption: Kenya was niminated to host the 13th World Scout Moot from 27th July to August 2010
Vice President Kalonzo Musyoka Sunday said a strategic plan to enroll one million scouts by the year 2013 has been put in place. Mr. Musyoka said to-date the Scout Movement is the single largest Youth Association in the country with over 300,000 boys and girls over 20,000 scout leaders.
He urged scout leaders, parents and guardians to support this initiative so that many youths can enjoy the benefits of scouting. 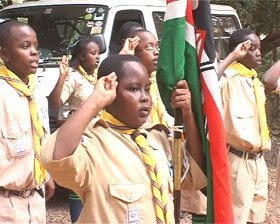 Mr. Musyoka noted that the government will continue to support the Scout Movement in Kenya in appreciation of the fact that it offers very good training for the youth in areas of leadership, responsibility and character formation, thereby supplementing government efforts to prepare the youth for their future in nation building.
The Vice President who is also the Scouts Chief Commissioner was speaking during the Scouts Founders Day celebrations at Nyeri Show ground, in Nyeri district.
Mr. Musyoka said that Kenya is honoured to have been nominated by the World Organization of Scout Movement to host the 13th World Scout Moot from 27th July to August 2010 and assured that the government will make every effort to assist the movement realize success of the conference.
The event is the first of its kind to be held in Africa and it is expected to draw over 300 participants from all over the world as part of celebrations to mark 100 years of scouting.
The Vice President added that the hosting of the event in Kenya is a demonstration of confidence in our country and particularly the youth who will be expected to play a lead role to make it a success.
Mr. Musyoka paid glowing tribute to the founders and pioneer scouts in the country including the late Jeremiah Nyagah, for their role in scouts growth and development.
He urged youth to emulate the members of scouting movement by upholding discipline and brother and sisterhood virtues.
The Minister for Youth and Sports, Prof. Hellen Sambili in a speech read on her behalf by Assistant Minister M. Kabando Kabando assured that the government will continue to formulate policies that empower the youth through income generating activities as well as incarcate leadership scales.
Prof. Sambili said there is need to maximize potentials of the youth through specific programmes that incorporate them in national development.
The Minister for gender and Children, Ms Esther Murugi said the scout's movement plays a great role in building harmony in the society, saying children have no boundaries or specific community.
The Chief guest Mr. Stephens Harmon who represented the US Ambassador to Kenya , Michael Ranneberger urged the scouts to uphold the principle of their motto and promise in order to be useful in the society and avoid social evils.
He said the US government will provide Kshs.120million in the next two years towards the scout's programmes, particularly the fight against HIV/AIDS pandemic.
Also present were the Chief Scout, Francis Kaparo, Mr. and Mrs. Clay Baden, great grand child of the scouts movement founder the late Lord and Lady Baden Powel, Tetu MP, F.T. Nyamo, Several diplomats, representatives of scouts in the world among other dignitaries.
Posted by HenrytheScout at 1:33 AM